How to Be Anti-Niche with Mike Anderson

Mike Anderson is coming off of a several-month stint photographing cars for a marketing company through Hyundai. Since October he’s traveled across the country, staking out the best images at auto shows, and now that his gig has wound down he chatted with us about what comes next.

“I’ve learned to say yes to whatever needs to be shot and that has always led to something else after that.” He’s been shooting for two years, at least one of which he’s shot professionally. For the past six months he’s accepted whatever work that’s come his way, including weddings and photos of newborns, and come April he’s becoming a gun for hire.

Unlike typical wedding videographers, it’s clear that Anderson is a self-proclaimed “anti-niche” pro.  Of the weddings he’s been hired for, he makes it clear to his clients that he doesn’t plan to shoot like other photographers. He prefers to stay true to his aesthetic and capture candid moments with a street style spin.

“You tell yourself in advance I’m going to pursue what I want. Then you start getting paid. I said I wasn’t going to shoot a wedding and I just booked my sixth wedding. It’s very easy to get caught up. I try to remind myself to shoot with a purpose.”

“I miss all the good snow while I travel. This was our first snowstorm last year in November.” He points out the details of the street slush and the snow piled on the arch of the bridge. Anderson relishes the challenge of harsh weather. “This is inspiration for me. I think it’s very easy to go out and shoot in the summer and it takes more dedication to shoot when it’s nasty out.” 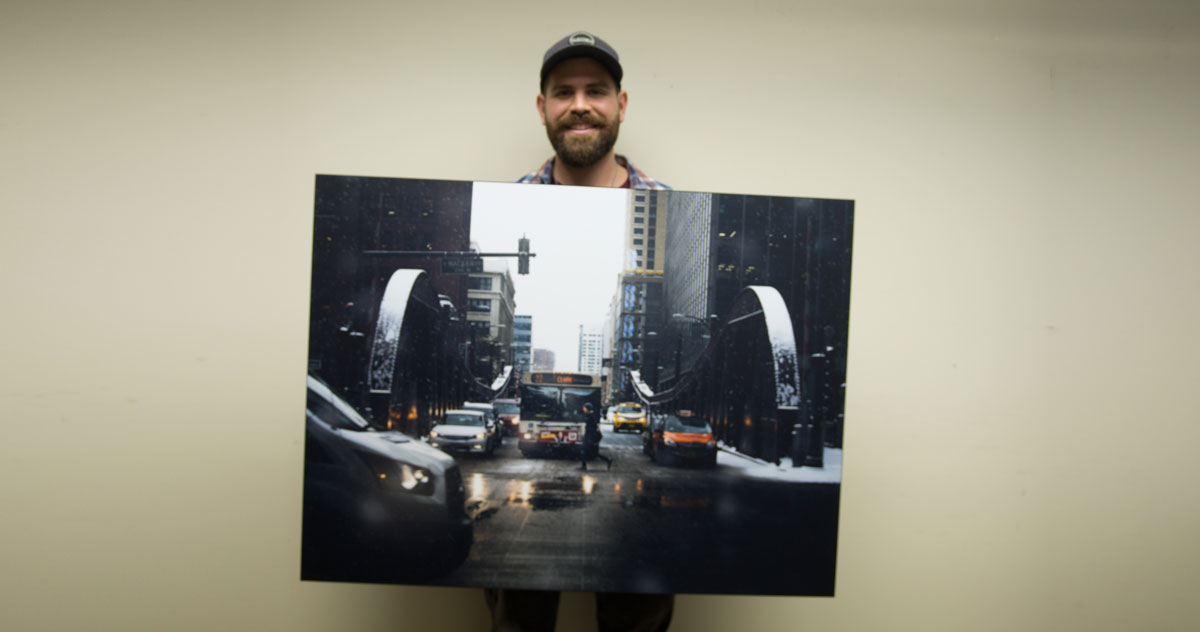 “That shot wouldn’t have been nearly as cool if it wasn’t snowing out. That’s the cool thing about shooting in a city with weather like Chicago.” The image is a head-on shot in front of a Chicago Transit bus, flanked by cars and stopped on a bridge over the river. The haze of snowfall translates clearly from the photo captured on his Nikon D750 with 24-70 2.8 Sigma Art Lens. It’s an image consistent with the everyday hustle of the city, rain or shine. You could say he’s happy with the quality of this print.

In the past he had printed twenty of his photos on 6x6” wood blocks, which he left around the globe during his travels for a project. Currently, he’s learning to pilot a drone camera to shoot video and photos. He’s also in the process of compiling a book with his studio partner and plans to hold a gallery opening featuring the book.

When it comes to collaboration and getting his art out in the open, there’s no time like now. “If anyone wants to get their photos printed, all I can say is you just need to pull the trigger and do it. It's so easy to get caught up looking for better pricing or options and then you never end up actually doing it.”

Sticking with his “in the moment” style of shooting, his start as a photographer may not be too surprising. “I met a girl at a bar and asked her to teach me photography.”

When asked how those lessons progressed post pick-up line he revealed that they never happened. “I bought a real camera and kind of knew what I was doing already. I became so consumed by photography and left for this trip abroad. It took over. That was my thing.”

Traveling and snapping photos are Anderson’s first loves, but he expresses that photography demands commitment as much as any artform. “There’s a lot to be said for the person who has the dedication to keep going back to the same spot day after day. I see people in Chicago who shoot the Hancock from Oak Street every day and their shots always look different.”

During his own travels, he finds that he never shoots in the same place twice. A change of scenery informs his point of view when photographing a subject. “I go to a city that’s new and I just walk. I’m featured [on Instagram] more in these cities that I’m visiting. I’m not sure if it’s because I look at their city differently.”

His time otherwise is spent building his portfolio on Good Vybes Daily, and readying to promote himself so he can continue following his passions. “Traveling is my passion; which goes perfectly with photography. However, I don't necessarily need to be a ‘travel photographer.’ I plan on promoting my work in all aspects of life. Whether it's a wedding or product photography; it really doesn't matter to me. As long as I get to take photos and travel to new places; that's the life I want to be living!”